I recently participated in the Harvester Island Wilderness Workshop in Alaska. My time with fellow writers, workshop leaders, and the beauty of the last frontier allowed me to explore the craft of writing along with a new-to-me place on the planet.

It took four flights, on progressively smaller planes, to travel 4,500 miles. Twenty-four hours of crossing time zones and lengthy layovers, left me in a fuzzy twilight zone. I have found after so many miles and hours, airline passengers become numb to surroundings. Men with thick backpacks and women with massive shoulder bags have no idea how wide they are. In complete oblivion they walk the narrow aisle between airplane seats. When they turn to get into their seats, their massive girth takes out fellow passengers. Boarding time is definitely a most precarious moment for weary travelers.

My final flight, on a 9-passenger propeller plane, flew over the Kodiak harbor and then west over the glacial fjords and uninhabited lands. No roads. No houses. Total wilderness.

We bumped over air pockets that made my heart skip beats. The pilot calmly talked into his headset with its huge padded ear pads, oblivious to the rookies in the plane. He flew us between rocky slopes and low hanging clouds. My eyes drank in the scenery … to the left, now the right, oh but look straight ahead. Stunning!

We landed on the gravelly runway in Larsen Bay. Population of 70-ish, plus several hundred immigrants who helped run the local seafood cannery. Our walk to the water’s edge took us past a stream filled with salmon in life’s final journey. One by one the fish surged forward to spawn upstream. 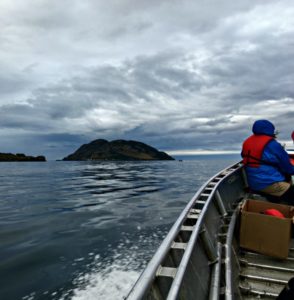 Next means of transport: The 25-foot skiff. Three flat-bottom, shallow boats transported our group of now 20 to Harvester Island. No bridge or landing strip accessed our destination. Food for the upcoming week along with all of our bags joined us in the skiffs. At the helms of the boats were our hosts: Leslie, Duncan, and Abraham Fields.

The 45-minute trip to Harvester Island severed the final links to my known world. We would be cut off from outside communication more than any place I had been in a long time. No newspaper. No television. No other people. If it did not impact this little island I would have no idea what was going on. It would be a very nice week.

One afternoon, we visited the lagoon across Bear Island. Beachcombing turned up sand dollars, sea urchins, clam shells, and rocks of rich charcoal shades. From a slight rise in the shore, Duncan told stories of local lore and family histories. Boating accidents, losses from fire, and arctic storms wove hardship through the lives of the western Kodiak residents. Unlocked doors, generous gifts of time, and gracious hospitality, however, outweigh the struggles and have created a close-knit community.

We walked beyond the berm through a field of nettles and tall grasses. The gray-green blades thinned to reveal a shallow stream flowing from the rocky hills. I bent to drink the cool, clear waters. Fresh. Pure. We angled back to return to our skiff. Not far from the stream, we came upon huge bear tracks but no bear. Kodiak Bears love this time of year. The salmon runs are like fast-food restaurants with their quick and easy meals.

Each morning began with cereal and coffee and conversation in the Studio. We learned about each other lives back home and marveled at the picturesque scenery displayed beyond the enormous picture windows. Every morning several deer grazed on the 50 feet of grass between us and the edge of the island. The ocean spread out from there. Forest-covered hills rose in the not too distant Kodiak Island. Then the higher snow-capped mountains on the Alaska Penninsula rose farther to the southwest.

Another Afternoon in Alaska 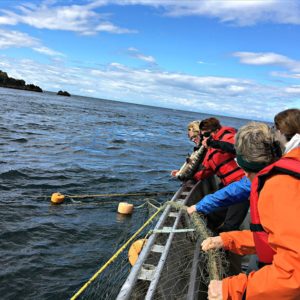 Seven of us climbed into the skiff with Leslie. Another five got in with Duncan. We motored around the south end of Harvester Island and came alongside one of their family nets. They have 15 nets in the water. A silvery reflection glittered in the net. We hoisted the section of net onto the skiff. A red salmon! Leslie squeezed the gills and pulled it out of the net. It’s an action she has done countless times. We released the net and backed away.

We turned the skiffs and headed across choppy waters. The flat-bottomed boats slammed into waves, sending sprays of water across the boat. A rock outcrop the size of a half-sunken bus came into view. With engines quieted and voices hushed (an accomplishment for our group!), we approached.

A couple dozen sea lions lay sprawled across the flat-top rock. The look-out spotted us and howled a low warning tone. Heads began bobbing. A chorus of belching wails — worthy of any middle school boys gym class — escalated with each pass. I took lots of pictures… first with my cell phone and then with my Nikon and then with my cell phone. Photos. Video. More photos.

Agitated with our presence, the sea lions began diving one by one into the water. With the grace of Jabba the Hut, they launched off the rock. Huge belly-flop splashes! 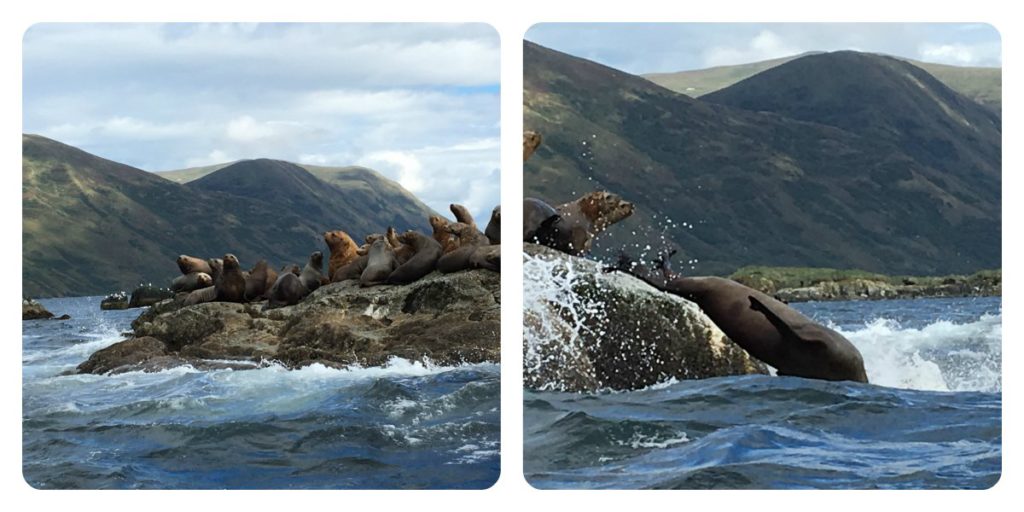 They reappeared as a pod swimming (or maybe floating?). They grouped together  most likely to avoid the Orca whales, their main predators. We spotted a couple otters floating nearby. I believe we were their source of afternoon entertainment. 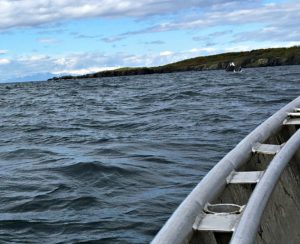 Then, off in the distance, a large black fin broke the surface of the water. An Orca whale! The fin reappeared. Taller. Then…he breached! He jumped out of the water twice! Our afternoon was like stepping into the pages of National Geographic.

The return to Harvester was quite bumpy. Standing, with knees as shock absorbers, proved more comfortable than sitting. We got wet from the churning seas. But the freedom of being out on the water, plowing through waves, and sense of smallness invigorated. It was a bit on the wild side, definitely not like life at home.

S’mores, Eagles, and the Fin Whale

Our final afternoon, we packed lunches and headed across Uyak Bay to Zachar Bay. Calmer seas welcomed us. The sky was a surreal true blue. The air was clear enough to see the tall and regal mountains on the Alaskan penninsula.

As we neared the shore, a water spray blasted of the port side of the skiff! A Finn whale had joined the picnic caravan! He surfaced a couple more times before arching into a deep water dive. We hung out for about five minutes talking about whales and the Finn returned! He came so close I saw his blow hole open. I was mesmerized by his size and grace.

We passed the sea gull condos on our way to our lunch spot. Three tall rock formations rose off the shore. The nooks and crannies provided the perfect collection of ledges and flats for hundreds of gulls. Meanwhile eagles soared overhead and watched as only an eagle can do. They glided on winds that appeared to take them next to the sun itself. I fried a few brain cells as I watched their aerial acrobatics.

My Alaskan adventures quickened my soul to recognize the vastness of creation. My suburban life allows me to think I’m in control. I discovered a contentment in the massive dome of northerly stars and the blue depths of the waters. Smallness and humility joined me as companions. I hope they stay with me back in Virginia.

(Next post, Soul Metaphors, focuses on the writing workshop part of Harvester Island.) 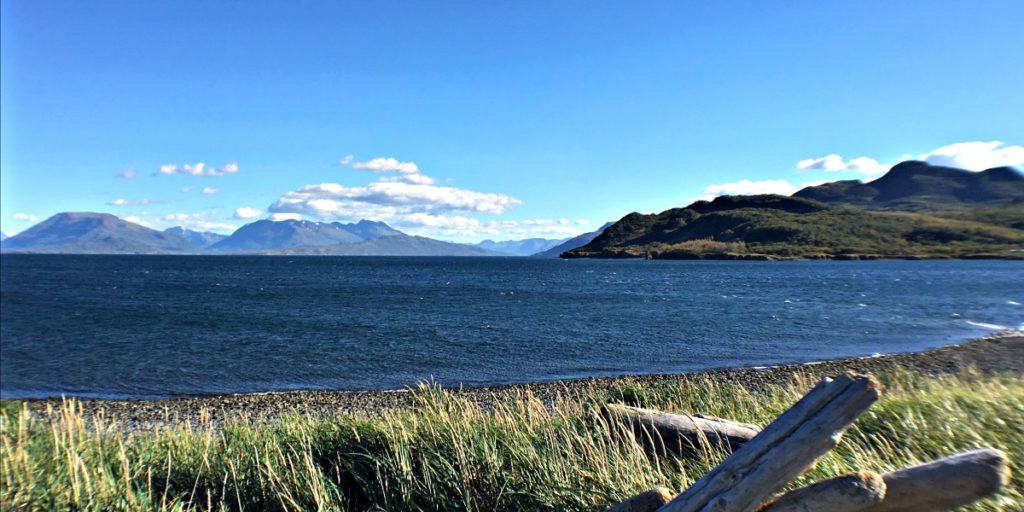 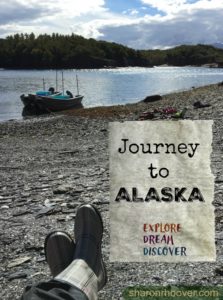