Potters, carpenters, leatherworkers, silversmiths, tentmakers and weavers provided necessary goods and services. The market hosted stall after stall of the wares from these skilled workers. Knowledge and tools were passed through generations and apprenticeships. 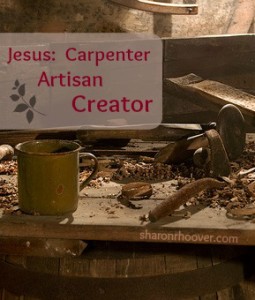 Most artisans oversaw every step of their production process. A hunk of clay did not arrive via the mail service. It was dug up locally. The potter mixed it with water and additives, such as ground limestone if the item would be made into a cooking crock and needed to withstand extreme temperatures.

Tentmakers and leatherworkers worked the hides. They skinned and removed the hair, beat and tanned it pliable, soaked it, and occasionally dyed it. Scholars note that the steps in this process were so, um, pungent that tanners had to work outdoors and downwind of the town! With the leather prepared, the artisan could them create tents, belts, helmets, shoes, and more.

Carpenters had to be a sturdy lot. Cutting down trees, laying timbers for buildings, and swinging an ax required much strength and endurance. Carpenters developed their skills to also create furniture, chests, and objects for the home. Expert carvers added elaborate engravings to some pieces.

Into this world, Jesus came. Much conversation exists among some scholars as to Jesus’ occupation. Before he began traveling to spread the Good News of the Kingdom, he was a carpenter as his earthly father was before him. (Matthew 13:55 and Mark 6:3)

In the Greek, the word is tekton; it is mostly translated as “carpenter”. Recently, however, some scholars have suggested that tekton could better be translated as builder or maker but not necessarily of wood. Whether wood or iron, chairs or bridges, it remains that Jesus is described as a tekton. He is a builder…creator.

The Word-made-flesh once again creating.

Jesus lived and walked among us. He became fully aware of the smallest details of life. I wonder how many storage boxes he made? Jesus spoke frequently about storing stuff. He was quite aware of people’s need for more boxes!

How many yokes and plows did he make? He uses his familiarity in parables of farmers plowing and illustrations of relationships unequally yoked. Maybe Jesus crafted doors and gates. He would go on later to declare “I am the gate.” (John 10:9)

Although Jesus never had to wrestle with a computer hard drive crash or a broken refrigerator or a car that failed inspection, we can be assured that he wrestled with the struggles of everyday life.

People disappoint, tools fail, schedules slip…no matter what year in the story we live. Jesus is fully aware of our troubles. We can be confident in His understanding and grace as we call out to Him!

One final thought: Just as He joined pieces of wood together, the earthly life of Jesus restored our relationship with the Father. The Carpenter now calls you and me to be a part of the restoration project.