Forgiveness is a critical part of our every day lives. The lack of forgiveness can take on a tragic life of it’s own.

Everyone has been hurt by someone else’s actions or words. Sometimes it’s intentional, sometimes not. Regardless, the pain is real. Yet the Scripture calls us to forgive. 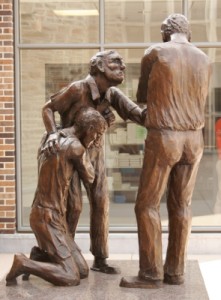 Jesus told the Parable of the Prodigal Son (Luke 15:11-32) to illustrate the Lord’s limitless capacity for forgiveness. We have much to learn from the grace extended in this story.

Quick overview of the story: The younger son humbly returns home after squandering his inheritance. He is broken and seeks his father’s forgiveness. The father rejoices upon his arrival! The older son, however, shows his resentment toward the whole situation. The father reaches out to his older son to remind him of his own abundant life.

The younger son’s tattered clothes and sickly body told the story of decay he suffered.  In an amazing picture of grace, the father forgave him instead of lecturing, ignoring, i-told-you-so-ing, or enslaving him.

Duke Divinity School’s Center for Reconciliation commissioned a sculpture to tell the story of forgiveness. Click here for artist’s slideshow description of the character and emotions of the Parable of the Prodigal Son.

Do you need to ask someone for their forgiveness? Please lift this concern to the Lord and pray for ways to approach him or her.

Or… has someone hurt you? Sometimes the “offender” is not aware of the wound he or she has inflicted. Pray for the strength to go to him/her and to tell what happened. Solve the conflict and seek reconciliation.