… continued from Who are you influencing? (Part 1) 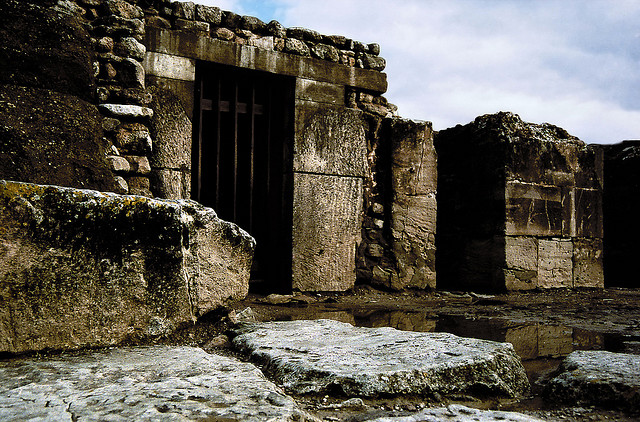 Brutus took custody of the bleeding and beaten men. He thrust them into one of the inner cells. Fastened their feet in the stocks.

“We don’t need your kind around here. For disturbing order in the empire, you’ll receive the death penalty,” he spewed.  “Scum.”

Brutus slammed the heavy stone door shut. He paused as they began to softly talk. They called each other Paul and Silas. They have names, Brutus thought, Jewish names.

What were they doing??  Brutus listened closer.  “… at the name of Jesus every knee should bow, in heaven and on earth and under the earth, and every tongue confess that Jesus Christ is Lord, to the glory of God the Father.”

Yes, Brutus had heard about this king… the newest one revered and worshiped.  The Roman Emperor is the one and only god in our empire!! Tomorrow’s execution will put an end to this noise.

Midnight approached, Paul and Silas were still praying and singing hymns to their God. Brutus could not help but hear their noise. Never before had a prisoner sung! And, these outsiders had been severely whipped. How could they sing while in that kind of pain? And, did they not know their coming fate?? On his rounds, Brutus could even see the other prisoners awake and leaning toward the inner cell as if yearning to hear the words of the outsiders.

Suddenly, the walls began to rumble. The floor started moving under him. An earthquake! They had not experienced one in years!

But, of course, he could not. Deserting one’s post was punishable by death.

The quake continued. The jail walls cracked. Large chucks fell from the walls. Brutus struggled to stay upright. The last thing he remembered was his panic as pieces of the ceiling crashed to the stone floor.

When Brutus awakened, everything was dark and still. He pushed himself up.

Dust hung in the moonlight shadows cast down the prison hallway. NO! Cell doors stood wide open. They must have been forced ajar as the walls and ceiling lost their support. He stumbled into the rubble of the hallway.

This was a certain death sentence. Prisoners had escaped while he was on duty. The shame. Brutus thought once again of his family. He would never see his wife again. His children. They would be utterly disgraced.

Brutus stopped. In the shadows, he felt for his sword. He would not allow them the humiliation of his public execution. Tears welled up in his eyes as he drew the sword out of its sheath. He placed the point just under his ribs.  His last thought was of his family…

Suddenly, an unexpected shout intervened!!  “Do not harm yourself, we are all here!”

His whole body trembled. Could it be true? He ran and stumbled to the voice. It was the prisoner Paul. Passing the other cells, he glanced in and saw each of the other prisoners.  Could it be… were they all there? Why??

Brutus collapsed at Paul’s feet. He could barely hear Paul’s explanation amidst his own sobs. What power did this man have?? What influence did he have on the prisoners?  They had listened to Paul. They were all there. Never had he met someone like this. From where… or whom ….did his influence come? Thoughts continued to race through Brutus’ confused mind.

Brutus gathered himself up. He unlocked Paul’s and Silas’ chains. He led them out of the crumbled debris of the damaged prison.

“Sirs, tell me of your faith. Who is your God who works through you to influence others??” Brutus begged.  “What can I do to find this faith??”

Paul placed his hand on Brutus’ shoulder, “Believe in the Lord Jesus Christ and you will be saved  — you and your household.”

In that moment, Brutus embraced the Lord with all his heart and soul and mind. He, too, gained the power to influence. For that very day, his entire household was saved!!

Who influences you? Is it the Lord who reigns in your heart … allowing you to know joy even in the most dreadful situations?

Who do you influence? Who in your circle of friends can you influence with the grace of the Lord’s peace and guidance and encouragement?

Consider the phenomenal gift of Jesus Christ. Our belief in Him leads us into God’s presence forever. Share the gift. Influence a friend today!