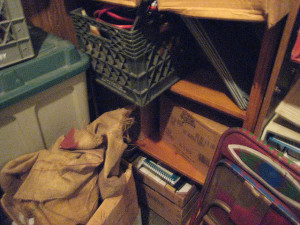 So much stuff. And, we pay for organizers and sheds to make room for even more stuff!

The postcard noted that the donation pick-up truck would be on our street in two weeks.

We have so much stuff. But I “need” it all. Most of it is so I will be prepared. Extra gloves, sheets, towels, shoes, tools, books, etc etc etc. But prepared for what???

Fear of the unknown keeps my closets full. What if I need “it”? In the name of “being prepared” I have hoarded away lots of stuff. Don’t worry. I’m not a clinically-declared hoarder. But really…I have a lot of stuff.

In her beautiful book about her life in Uganda, Kisses From Katie, author Katie Davis shares the following parable first written by Henri Nouwen…

Once there was a people who surveyed the resources of the world and said to each other: “How can we be sure that we will have enough in hard times? We want to survive whatever happens. Let us start collecting food, materials, and knowledge so that we are safe and secure when a crisis occurs.”

So they started hoarding, so much and so eagerly that the other peoples protested and said: “You have so much more than you need, while we don’t have enough to survive. Give us part of your wealth!”

But the hoarders said: “No, we need to keep this in case of an emergency, in case things go bad for us too, in case our lives are threatened.”

But the others said: “We are dying now, please give us food and materials and knowledge to survive. We can’t wait…we need it now!”

Then the fearful hoarders became even more fearful, since they became afraid that the poor and hungry would attack them. So they said to one another: “Let us build walls around our wealth so that no stranger can take it from us.”

They started erecting walls so high that they could not even see anymore whether their enemies were outside the walls or not! As their fear increased they told each other: “Our enemies have become so numerous that they may be able to tear down our walls. Our walls are not strong enough to keep them away. We need to put bombs at the top of the walls so that nobody will dare to even come close to us.”

But instead of feeling safe and secure behind their armed walls they found themselves trapped in the prison they had built with their own fear.

They even became afraid of their own bombs, wondering if they might harm themselves more than their enemy. And gradually they realized their fear of death had brought them closer to it.

I will go through several closets in the two weeks.