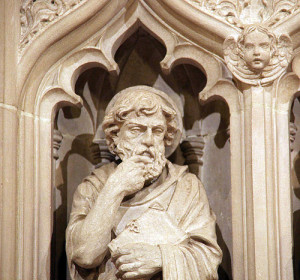 Welcome to Week Nine in How To Study the Bible series! (To begin the series click here.)

As you explore Mark 13 & 14, you will…
1) learn how to do a Character study using the various online Bible research resources to answer comprehensive biographical questions.

2) learn about the Apostle Peter through his family, flaws, and passionate faith; you will also be able to apply lessons learned from his life to your life and walk with the Lord.

Review of Week Eight: How to do a Topical Bible Study in Mark 12

First, you learned to use topical Bible study resources including Nave’s Topical Bible and the Dictionary of Bible Themes.

Second, you learned that loving God with an all-encompassing passion must be our life and our being. Through all the ages, this love remains the first commandment as well as the foundation of all that is required of us as God’s people.

How To Do A Character Study

Lord, direct our path today as we study your Word. May we have eyes to see and hearts ready to be transformed. We pray also against all distractions as we seek to be focused on your guidance. In Jesus’ Name, Amen.

Character studies allow us to examine the lives of those who the Lord chose to immortalize in the Bible. Sounds obvious…but consider the people and eons that the scriptures cover. The Holy Spirit inspired the biblical writers to include the good, the bad and the ugly. We gain valuable insights from those who failed as well as those who succeeded in their journeys. Scripture shares scores of men and women who lived in both arenas.

More than 2,900 people are specifically mentioned by name. Let’s get started!

1) Choose your character
2) Explore the references available in your Bible to find passages regarding your character
3) Use online resources to find more references and details about your character
4) Answer the following questions:
4.a.) Describe his/her parents, siblings, children, childhood.
4.b.) Describe his/her education and vocation.
4.c.) Who were his/her closest companions? Good or bad influences in him/her?
4.d.) How did he/she influence others? What gifts and talents did he/she have?
4.e.) Describe his/her encounters with God.
4.f.) Did he/she humble himself/herself before God?
4.g.) What were his/her greatest mistakes?
4.h.) What were his/her greatest contributions to the Kingdom?
5) Summarize your results into a a brief biography
6) Choose an image that best portrays your character (so many options online!)
7) Determine how to apply your research results in your own life (do you need to act, memorize, read, pray, speak to someone, or something else?)

An example of an extensive summary biography is my post on Job. My Neighbor’s Crisis retells his multiple tragedies and how he handled them.

2) Explore the references available in your Bible. Helpful appendices in my personal Bible included “The Ministry of Jesus,” “Miracles of the Bible,” and “Dictionary-Concordance.” I located five key passages where the biblical authors told about Peter (Mark 14:66-72; John 21:15-23; Acts 2, 3:1-26; Acts 4:1-22). Also I gathered general biographical information.

3) Use online resources. I found Nave’s Topical Bible and several dictionaries in Biblos to be most fruitful for my research on Peter. HUGE amount of information!

4) Answer the following questions:
4.a.) Describe his/her parents, siblings, children, childhood. Parents not mentioned; at least one younger brother, Andrew; lived in Capernaum with wife and mother-in-law; children not mentioned; grew up in Bethsaida

4.b.) Describe his/her education and vocation. Fisherman with limited education; later became an evangelist and missionary; his wife served with him

4.c.) Who were his/her closest companions? Good or bad influences in him/her? With James and John as Jesus’ inner circle; John Mark traveled with him later as a missionary; all good influences on him; he was among the oldest of the disciples

4.d.) How did he/she influence others? What gifts and talents did he/she have? Peter was a leader, self-confident, and courageous. He was an evangelist and did miracles. He preached and taught to all around him. Under Peter’s tutelage, Mark wrote the gospel that was likely the first recorded accounting of Jesus’ life and ministry.

4.f.) Did he/she humble himself/herself before God? Peter’s first encounter with Jesus brings him to his knees (Luke 5:1-11); then again following Jesus’ resurrection, he was humbled when Jesus commissions him (John 21)

4.h.) What were his/her greatest contributions? Peter was an Apostle and evangelist. He spread the gospel in at least Antioch, Corinth, and Babylon. He was a leader in the church at Jerusalem. He also wrote two letters that became part of the New Testament canon (1 & 2 Peter).

5) Summarize your results. Becoming the leader and frequent spokesman for the disciples was not an a natural path for Peter. When Jesus called him, he was an established fisherman with a family and home.
Peter’s rough and independent ways helped him to live the challenging life of a disciple but it also thwarted his faith. His reactions to walking on water, Jesus’ talking about his death, and footwashing were human and natural. But then, his soul broken for Jesus when they meet, after his denials, and following the resurrection demonstrate the Spirit’s work. The privilege of being with Jesus, James and John for Jesus’ Transfiguration and hearing the voice of God was an amazing grace give to Peter.
Following Pentacost, Peter rose as one of the primary leaders of the church. He was vocal, articulate (despite limited education), and courageous as he spread the news of Jesus Christ. The Holy Spirit also equipped him with the ability to do miracles, including even raising the dead! Despite being imprisoned and persecuted, Peter remained steadfast in his faith. Tradition holds that he died being cruicified…upside down because he did not feel worthy to be crucified as Jesus had been.

6) Choose an image. I am not sure if this statue is actually Peter, but it is the best representation for me of this leader of the early church. He stands boldly, gesturing and with a sparkle in his eyes! 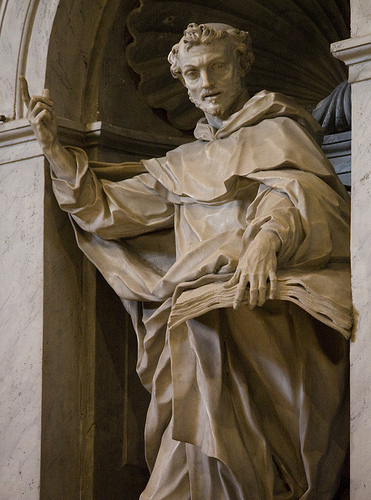 Peter becomes one of the leaders of the early church following Pentacost.

7) Applying my research. I am deeply comforted by God’s grace given to this servant. I know Peter’s impulsive reactions quite well. He learned to rely on the Lord instead of leaning on his own quick wit and wisdom. In the coming week, I will more heartily seek God’s word in my life and will bend my knees more faithfully & humbly in prayer to my Lord.

1) Do a Character Bible study on one of the other disciples.

2) Share in the comments below how you will apply your study. We would love to learn from your studies!

<<Week Eight: How to do a Topical Bible Study in Mark 12