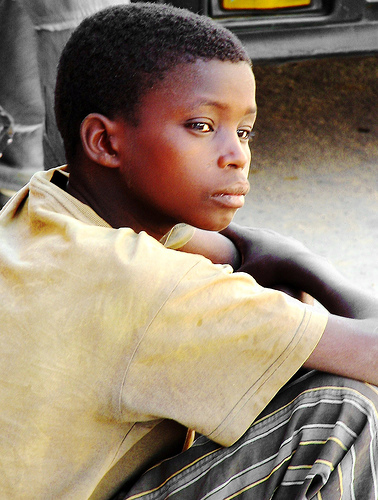 We found Moses on the street all beat up.

We never found out who pounded him. He never was right after that. His busted up legs healed all crooked, so did his nose and cheek. Looked like half his face just hung all lazy like.

Finding food has gotten harder. I don’t know why but the bars are throwing out less food and there’s more kids on the street. Some of them started fighting for food.

I’m not gonna fight for a couple bites of bread. I’ll wait. I used to only have to wait to the next morning, but sometimes I have to wait two days to find anything to eat. I remember… at my uncle’s I did eat something most every day.

Sometimes I’m just too tired to go looking for food and I just sleep.

But now, even sleeping is not so easy anymore.

If my cough doesn’t wake me up, the police or another adult makes me get up. I don’t know why. Nobody else is using the ditch. The sidewalks are crowded, the doorways are used. Where is a boy supposed to sleep anymore?

To pass the time, James started showing me this glue stuff. I sniff it when he lets me. The lala feeling helps the time go by between eating and sleeping.

When I get money from begging, I’ll get some food …. and some pot to smoke. That passes the time too. Maybe I’ll sell some pot to get money for more food and maybe some more pot. Maybe I could even get some medicine so my cough will go away and I can sleep.

We’ve started going into the market to look for food. If something is on the ground, I figure no one’s gonna want it. Some of the fruit that is sorta dark and soft, I figure its gonna be trash too. So I take it. But then the yelling starts! Apparently, the store owners think they can actually sell their rotten fruit. That’s stupid. But I gotta run… fast. That’s hard when you’re coughing.

If they catch me, they’ll stick me in one of them big homes for orphans. No way will I live there with all their rules and adults and school and crap.

They came and took Moses. You know, he couldn’t run with his crooked legs and all. We didn’t see him until a whole winter and start of the next summer. The government people had taken him to “Trade School.”

Moses learned to do wood-making stuff. They are trying to get us street kids to learn skills. He learned how to make chairs and tables and stuff. He even got to keep some tools so he could make furniture and then sell them.

He graduated and came back to our part of the city.

He got new smarts in his brains but no wood in his hands. He found some scraps of wood. So, he was gonna make a chair. Then he’d sell it and we’d have money. But the wood was old and splintered in his hands.

So he sold his tools. Then we had money to buy food. When that ran out, he helped us pick through the market. They’ll probably send him away again soon, cuz you know, he doesn’t run so good when all the yelling starts about us stealing.

But it wasn’t always this bad. Living on the street used to be better.