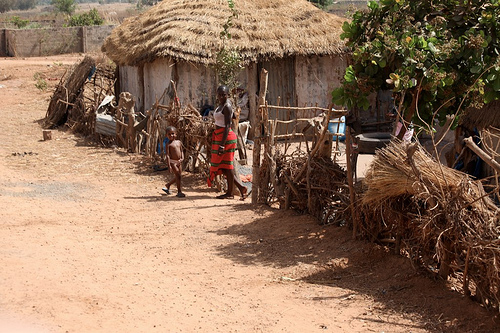 My name is Kaole. I live in a small village in southern Africa.

I am the youngest girl in my family. I don’t remember my older brothers. They died before I was born. But my sister was around for a while. She was about 14 when she married and moved away.

Death has always been a part of my life. I was about five when Daddy died.

Mama grew small crops on our bit of land. We mostly tried to grow cassava and potatoes. We sold them in the village market. But Mama couldn’t do it all by herself. So I quit school when I was about 8 years old. It also helped to not buy school uniforms and pencils and a backpack. We now had enough money to buy fish or some meats to add to the nshima — that’s a corn and water porridge.

I took on some small jobs drawing water for other people and washing  their clothes… plus doing me and Mama’s chores. Mama and I kept working our little field, too.

The clouds stopped giving rain for a while. The potatoes came out real small.

One afternoon, my sister Brenda, came for me. I guess I was eleven. She brought food. She was married to a good man. I was to go with them for a bit and help care for their boys (James and Rolan) and one girl (Linn). Brenda planned to go out and get work to help the family. Mama would then have only herself to feed.

I wasn’t with Brenda for even a year when she and her husband both got sick.  They couldn’t breathe well, their legs all swelled up.  They would sweat right through the sheets.  It smelled real bad.  Brenda couldn’t get up much anymore.  She needed me to take care of them … and also James, Rolan and Linn.  Good thing I was there.

But we didn’t have much money. We were going through it too fast…

How could we make enough money to buy food, pay school fees, pay bus fare to get my sister to the clinic, and then buy medicine? I took on jobs washing clothes and drawing water for people. I still needed time to look after my sister and her husband too. The money ran real low.

The kids had to quit school. We didn’t have money for the fees any longer. It would just be for a short while, I told my sister. School is real important. I hope I can get educated too.

The kids tried to get jobs drawing water and other odd jobs. I’m not sure when but we came to eating only once a day.

We ran out of medicines for Brenda and her husband.  The boys stopped running around and playing. The older one, James,  just stared into the distance. If you don’t get food in your body, I guess the body shuts down parts of your brain. It just stops working right.

Then a friend I met drawing water told me about another way to make money.  “It’s for survival.  Just until something else comes my way,” she said.

She was selling her body. In night clubs and hotels, she had sex for money. I could never do that. It would kill Mama if she knew I was even thinking about it.

But things changed when my little niece started coughing. She got the tuberculosis that was sucking the life out of my sister and her husband. Medicine … if I only had money for medicine.

That’s when I did the unthinkable. I had no choice. Sex for money. I tried not to think about what I was doing. Just forced myself so my family could eat and get medicines. I didn’t tell anyone. They thought I was working in a restaurant cleaning tables.

We got medicine.  We even ate two meals on most days.

But Brenda’s sickness got worse.

(Poverty is real. Orphans in Africa, families in Appalachia, homeless men and women in Washington DC metro area … their faces and stories slideshow through my mind. Each is precious. Their stories are all different. Kaole’s story is a combination of the real stories of several children’s …)