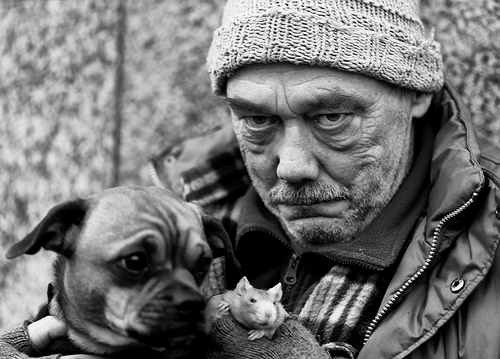 Chris, one of our church members, pulled out his guitar and began to play. This attracted the attention of one guy on the benches. He had an old electric guitar resting between his bagged-possessions.

Chris kept playing then walked over to electric-guitar guy.

“Hi!” Several students from our church, gracefully and warmly, extended their hands and introduced themselves to electric-guitar guy and to the four other homeless men and women. Conversation and music followed.

Niko’s story: He stopped attending school in the first grade. His mom did the best she could but he ran around on the streets. No mention of a dad. Niko became a drug addict then a dealer. He had been shot and stabbed multiple times. The scars on his arms and head remain as battle wounds from the street.

By his 35th birthday, Niko was in prison. While there, he witnessed a son caring for his aging dad … both in prison. At that moment, Niko told me, he realized that this was not the future that he wanted.

First, Niko needed to learn to read. He began watching Sesame Street. For 18 months, he watched the show until he read a New York Times article for the first time … at 37 years of age! He told everyone that he could read!

He was released from prison. A bookstore was one of his first destinations. Niko bought a dictionary. He read it. He soon committed to learning construction trades. He told me that he is now skilled in carpentry, electrical work, and some plumbing even. He just moved into his own apartment. Here in this park, though, are his friends.

Spiritually, he shared that he believes that “all roads lead to God.” He’s tried many churches.

“None of them are any good,” he told me…a bit of weariness in his voice. “I don’t tolerate anyone or any pastor judging what is right and wrong thinking. Besides … (long pause) … they did not treat me very well.”

My heart broke for this man. Many Christians and their churches had emotionally injured him. I gently agreed that some churches are not healthy. I shared that all churches, though, are made up of sinners … including me.

His chin slowly moved up and down. Chris’ guitar and the blended, beautiful voices continued. A burst of laughter captured our attention … must have been a funny joke or lyric!

I continued. “We all sin, Niko. But God created the church as a community to care for one another. We need to be a part of a Christ-centered body to encourage us and to hold us accountable.”

“I don’t buy that.” Niko’s rasped voice responded. “There ain’t no true church.”

I handed him our last piece of beef jerky. I looked deeply into his eyes…drooping eyelids half covered his dark pupils. “The church is present, Niko, at this moment with you.”

He cocked his head. Listened. Pondered.

We stayed in the park another two hours. Chatting, sharing our lives.

Our building would be locking up soon… so we prayed together: NYC street-wise men and women alongside the suburban Virginia church.